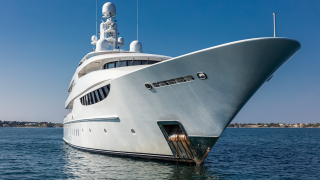 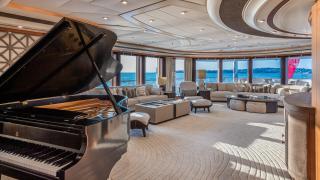 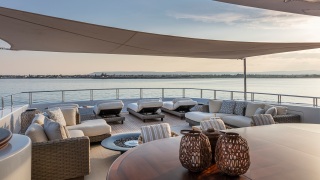 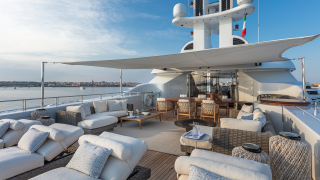 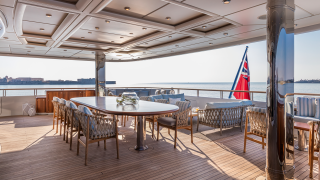 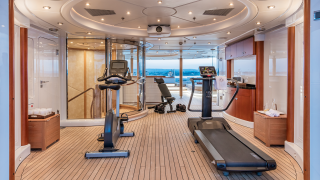 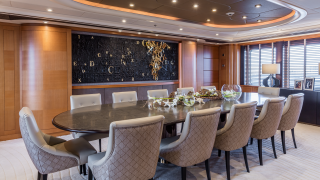 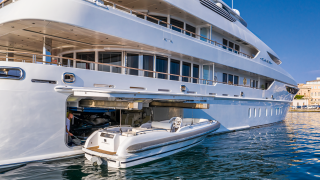 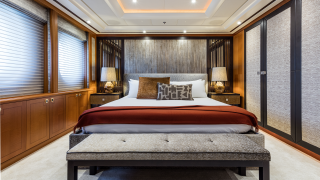 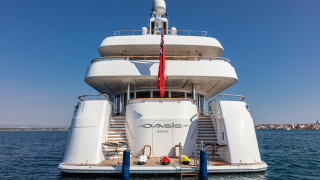 Oasis: On Board the 60 Metre Superyacht by Lu?rssen

Oasis still wears her name proudly after 14 years and, in many ways, it has never suited her better. New European owners have comprehensively refitted this 60-metre Lu?rssen to serve as a luxurious hideaway for use by three generations of their family at the same time.

Since her launch in 2006, she has undergone three major interior refits, but this last one, courtesy of Italian studio FM Architettura d’Interni, may just be the farthest-reaching yet. Co-founder Francesca Muzio was asked in 2017 to re-imagine the maple burr and wenge interior designed by Glade Johnson in 2006 and updated in 2009. For the owner couple, it was a question not just of personal taste, but also of function. “When we first came to the boat it was full of obstacles,” says the owner’s wife. “We wanted to step on board and see from one end to the other.”

The boat’s layout reflected a predominantly charter use by its previous owner, for example with vast numbers of sunbeds showing a focus on sunbathing; or with less than generous storage in bedrooms, reflecting the short-term nature of their use. The new owners had different ideas, however. “It is a family vessel, so the main purpose was to revise the areas to increase the comfort in an elegant and stylish way,” adds the owner’s wife. “When we travel with our yacht, we enjoy the company of our family and friends together with their kids.”

Size was therefore a key factor in the choice of this yacht, and Muzio’s job was to make that space work harder – much harder. “With an 11.1-metre beam, the yacht has a very large volume,” she says. “We won the commission in the first place because we understood [the family’s] needs. Spaces were to be multifunctional – we wanted much more flexibility than in the past.”

There is barely a guest area of the boat that has not been transformed by the FM team in the redesign, which unfolded over two winters, with a full season of owner use in between. But the biggest changes by far concerned the huge 130-square-metre sundeck. From the off, it was designed to be the centre of outdoor entertainment, with a spa pool, a huge bar, open shower and a sunbathing area that could quickly be cleared in order to land a helicopter aft if required. A dumb waiter whisks food up directly from the service area on the main deck, or the wine store two decks below that.

“The sundeck changes with every hour of the day,” says Captain Massimiliano Frazzetta. “In the morning it’s a gym, in the afternoon a spa pool, and in the evening it’s a cinema or a disco. If we have a big party up here, we use the crane to lower the gym kit down to the garage.”

The redesign involved reducing the size of the bar to improve access through the covered part of the deck, completely remodelling the spa pool area forward with bulwark-to- bulwark sunpads and installing a 4K projector in the hardtop. It meant matching new teak with the original decking and building a new structure around the spa pool itself.

Captain Frazzetta shows me how new LED lights in the hardtop can add a club atmosphere to proceedings, and audio jacks also allow for a band or a DJ to plug their kit into a hidden bank of audiovisual equipment. On quiet nights, the area becomes an outdoor cinema via a projector screen that drops from the back of the hardtop. There is an array of comfortable free-standing Flexform sofas and loungers aft, where a soft bimini deploys easily to provide shade from the heat of the day, automatically retracting in more than 15 knots of wind.

The guest cabins were another significant focus for the refit, with storage improved, fussy styling removed and, in the children’s room, some clever engineering. “There was a request for as many beds as possible in the children’s area,” explains Captain Frazzetta. “So we put bunk beds for four in one cabin.” These are designed to look like normal single beds when not in use, but when you pull up the top of the fabric-padded divan, it rises on stainless-steel legs until it clicks into place as a top bunk, revealing the second bed below.

But to really understand the depth of the refit, you have to head to the upper deck. On paper, it looks quite similar – nothing has been radically repurposed, and no bulkheads have been moved. You have to peer in more closely. Look at the knobs on the many cabinets and drawers in the upper saloon: they used to be ornate, gleaming golden metal affairs. Every single one throughout the boat – perhaps hundreds in total – has been painstakingly covered in Galuchat leather. Why did they not simply replace them? “We liked the intricate mechanism, which was very sophisticated,” says Muzio. “It had that Lu?rssen quality.”

Walk forward now, through the corridor past the sumptuous curved stairway leading down. Just before you enter the masculine, clubby space of the wheelhouse, turn to port into the VIP cabin. Facing you here is the curved form of a chest of drawers partly built into the forward bulkhead. Like so much in the new Oasis, it is covered in leather, but this wasn’t always the case. Underneath is the same orangey maple burr, which featured throughout the boat, gleaming with a gloss finish. “In the past, burr was a luxury signal,” says Muzio by way of explanation. One of the biggest jobs on board has been to sand much of this back and give it a far less intrusive matt finish.

Frazzetta continues: “All the structural elements are very solid and well made. We had to take pieces down and look behind to see how we could refit them. It was very hard work, and we never knew what we would find.”

Muzio returns to the leather. “The team took a template in paper, then cut the leather and glued it in situ,” she says with a grave expression that seems to underline just how ticklish this really was. “It is very skilled work to get the corners.” Then she smiles. “At a certain stage of the project, you ask yourself, why did you do something so difficult?”

Here, as in the four other guest cabins, FM Architettura d’Interni has created a completely new feel to the room. “The guideline was to have a contrast between materials – comfortable fabrics and neutral colours,” says Muzio. Every bed has been redesigned, with a new headboard, signature colours and new panelling – some with wallpaper, others with fabric, wood or hammered leather. Unique lamps appear in every cabin on bedside tables that have been covered in differing tones of leather, and of course featuring the leather-covered handles. I ask what the little lightning symbol subtly embossed into every table is and get the answer when Frazzetta drops his mobile phone onto it. Near-field charging – a requirement that didn’t exist when this boat was launched.

Though leather is by far the most widely employed material (“the Marche region, where our Ancona office is located, is one of the most skilled districts in the world for high-quality leather production,” says Muzio), there are plenty of others to arouse interest. There are silver leaf-covered wallpapers, for instance, and others embossed with string picked out in various colours. But my favourite is the use of coconut shell as a wall covering. It is used in two very different ways – one in a parquet pattern on the wall of the lower deck lobby and again as husk in the bridge deck saloon. “The leitmotif all around the boat is tactility,” says Muzio.

The culmination of all these techniques, textures and materials is, naturally enough, the owner’s suite that dominates the forward section of the main deck. A large double bed is offset to port against a wall now filled with pale leather panels that bear the swooping curves of ocean swell. Exquisite leatherwork has also been stitched over the burr-wood tables and drawers, while some of the cabinetry has been removed altogether, to open up the space. To starboard, the tall windows spill light into a relaxing area, but gone are the granny-ish sofas and traditional wooden coffee table. The new furniture here has been custom-built to FM specifications, including a striking triangular table.

Deep silk-and-wool carpets were fitted here and in other areas by a Turkish manufacturer, cut with wavy lines. “There were some areas we didn’t like so much, and they just came on board with electric shears and cut new lines in front of our eyes. So skilled. It was crazy!” says Muzio in wonder.

Only the green onyx and golden taps of the owner’s bathroom and the gleaming burr of the office remain by way of hints towards the boat’s original look. The length of the project didn’t allow time to re-engineer the bathroom in particular, and the team recognised that the Pakistan onyx was too valuable to discard. Muzio contented herself with backlighting glass panels above the bath and redesigning the his-and-hers dressing areas to either side.

The focus on multifunctionality is evident everywhere in dozens of small details. It’s in the occasional tables in the main saloon, whose recessed tops can be flipped over to reveal a chess or backgammon board. Nearby is a coffee table harbouring a fleet of small pouffes in special docks underneath. Another table resembles a sheet of smashed glass, somehow dipped in burnished brass. “Top secret,” Muzio says when I ask how it was made. Or there’s the curved wall of the upper deck saloon, whose burr has been covered in perforated leather. It turns out that it hides the speakers of a top-flight audiovisual system, and the room also serves as a cinema.

But perhaps the most surprising feature of the boat is that there was no shipyard involved in its refit at all. It was a collaboration between the 20-strong team of designers and artisans from FM and around 40 craftsmen recruited by Frazzetta. “I’ve been in the industry for 12 years, so I know which carpenter, for instance, can provide a great solution,” he explains with a smile and a shrug. “The big challenge was to divide up the time, because I couldn’t have 60 people on board at the same time!”

Astonishingly, the answer to this potential mayhem seems to have come down to a large wall planner, allowing Frazzetta to see which jobs had to occur in which order. It is clear from the back-and-forth exchanges between the captain and the designer that they get on exceedingly well. “He was a real teacher,” says Muzio. “That’s why we were able to achieve this.” Frazzetta also describes the working environment as one of total harmony. “During this intense and stressful period, everybody involved worked peacefully. This was the secret to attain the objective,” he says.

And attain it they did – on time, on budget and without conflict. All of which makes this yacht an oasis by name, and, it seems, by nature.

48 Dolceriva: On Board the New 15 metre Riva Motor Yacht

Archelon: On Board the 37 Metre Oyster Sailing Yacht

Oasis: On Board the 60 Metre Superyacht by Lu?rssen

Canova: On Board the New 43 Metre Baltic Sailing Yacht