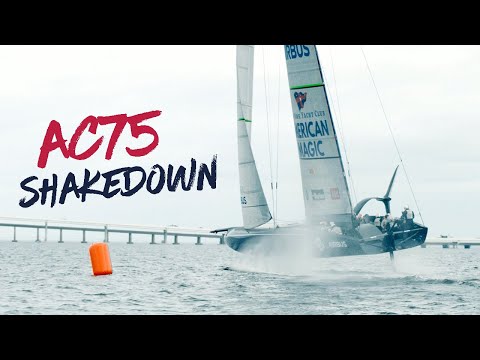 The first AC75 class boat of US America's Cup team American MagicDefiant has now arrived in New Zealand ahead of the 36th America’s Cup.

The New York Yacht Club’s first racing boat was shipped through the Gulf of Mexico and the Panama Canal before crossing the Pacific. It comes after the yacht left the team's winter base of the Port of Pensacola on May 28.

American's Magic skipper and executive director Terry Hutchinson said seeing the boat was unloaded in Auckland was "an awesome moment for our team" and "a significant milestone for the America’s Cup as well."

American Magic will now work to establish a new base on Wynyard Wharf in New Zealand and intends to sail Defiant around Auckland’s Waitemata Harbour and Hauraki Gulf after completing New Zealand's coronavirus quarantine period.

The yacht will first compete in the upcoming America’s Cup World Series in Auckland this December before the 36th America’s Cup takes place from March 6-21, 2021.

It comes after the 23 metre racing boat was launched and christened in September last year. Under the rules of the event, each team is allowed to construct two AC75s, a mono-hulled boat that utilises advanced hydrofoils to sail largely above the water.

Sir Ben Ainslie: Training for the 36th America's Cup will be more intense than ever